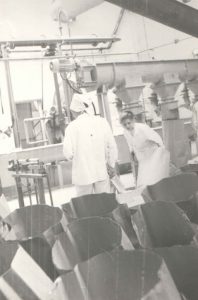 PPZ NOWAMYL S.A. is the only producer of potato starch and maltodextrine in West Pomerania region of Poland.

Producing and treatment of the potato starch in Łobez has already more than 100 years long tradition. In 1898 roku local farmers and other persons connected to agriculture headed by the governor of the Łobez district decided to buy the sugar factory which were closed in 1864. Sugar refinery was perfectly suitable to be transformed to the form of the new plant – a starch factory – because district had then a big surplus in potatoes production. Appropriate equipment has been quickly acquired and producing of potato starch was started.

At the beginning production output of the starch factory was not impressive and only so called “wet” potato starch was fabricated, which then were sent by rail for further processing deep into Germany. The factory was still being modernized and expanded to such an extent that at the end of 1934 was considered to be the best, an exemplary company in Pomerania. By that time the starch factory had already started production of the dried starch and potato flakes known in Germany and entire Europe under the brand name of “Elephant”

In 1939, just before the outbreak of World War II in the potato starch factory been celebrated the 40th anniversary of the plant existence. As it is apparent from the accounts of former residents of Łobez posted in the newspaper “Labeser Heimatbriefe”, they were very proud of their potato starch factory, that gave them employment and satisfaction, and the surrounding farmers gave the possibility to sell potatoes at favourable prices. 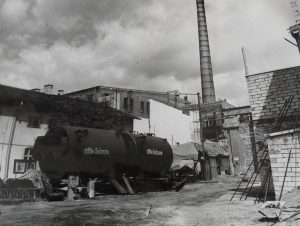 Thanks to activity of the potato starch factory, close vicinities of Łobez together with neighbouring districts have become real potato production center. The plant during the II World War ran processing of the potatoes surplus and continued to produce starch.